Before I went to Ireland for the first time in 2009, I knew exactly two things about St. Patrick: he had a day named after him that was celebrated by many Americans and he was supposed to have driven all the snakes out of Ireland. (Actually, given Ireland’s climate and geological history, there probably never were any snakes in Ireland, but that’s another story.)

All that changed the first day off of the plane. We rented a car in Dublin and on a dim, rainy day we set out to see the sights (“we” being myself, my husband, Edwin, and our three-year-old daughter.) Unbeknownst to me, we traced Patrick’s legacy by going first to the Hill of Tara, the site where Ireland’s High Kings had reigned and druids celebrated Celtic pagan festivals. There is a stone there which in druidic lore was supposed to shout when the rightful king touched it. (Our three-year-old insisted on touching it, but it didn’t make any noise.) As part of the festival celebrations in those ancient days, a fire was lit at Tara, and it was forbidden to light any other fires in the area.

From Tara we went to the Hill of Slane, about 10 miles away; you can see the top of one from the top of the other. While no one knows for sure, the long-believed story is that in the year 433 St. Patrick, who knew the significance of the pagan fires burning at Tara, climbed the hill of Slane on the eve of Easter and lit the “new fire” that signalled Christ’s resurrection. (Some Anglican and Catholic churches light such fires even today, 1700 years later, to herald the resurrection). The shocked and impressed High King Laoghaire agreed to let Patrick evangelize the Irish — including, it turned out, Laoghaire’s courtier Erc, who converted and became a bishop.

But that was not the end of our tracing Patrick’s footsteps. Our journey over the next few days led us to visit dear family friends in Northern Ireland. (As we arrived I remarked “I have stood on the Hill of Tara with the pagans, on the Hill of Slane with St. Patrick, and now I am in Ulster with the Baptists.”) In their hometown, Ballymena, there was — of course —  both a church and college named after St. Patrick. But then our friends took us to the city of Armagh, where two cathedrals named for Patrick – Roman Catholic and Anglican (Church of Ireland) – face each other across the city atop two towering hills. The Catholic one is actually newer, because at the time of the Reformation the medieval structure that dates all the way back to Patrick’s missionary work was given to the newly Protestant Church of Ireland by the English government. Though rebuilt many times, it retains a fifth-century core.

From Armagh we journeyed to Downpatrick, where Patrick is supposedly buried. Though the stone that marks his grave is less than 150 years old, the legend that identifies it as his grave is far older. But, indeed, I realized, his legacy was not bounded by that simple modern stone. Church after church dotting the green landscape testified to his impact. From the moment he lit the Easter fire, he had not stopped spreading the Gospel.

If you have the opportunity to explore Ireland personally, you will find St. Patrick everywhere. Adults and children alike can learn about his amazing life and impact from the Torchlighters episode The St. Patrick Story  (releasing Feb, 2020) and the accompanying documentary St. Patrick: Pilgrimage to Peace.

First Image Caption: A statue of St. Patrick on the Hill of Slane, courtesy of Jennifer Woodruff Tait 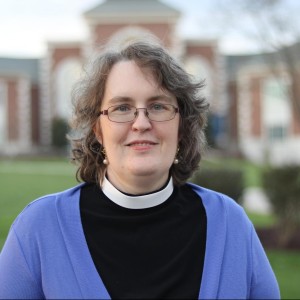 Jennifer Woodruff Tait is an author, an Episcopal priest, and managing editor of Christian History magazine, a publication of Christian History Institute, the makers of the Torchlighters.
PrevPreviousHarriet Tubman: The Moses of Her People
NextSt. Patrick, the runaway slave who brought the Gospel to IrelandNext